AKA – OUR EXPERIENCE OF THE MONTE HERITAGE RUN!

We had been anxiously watching the weather forecast all week – Wednesday, the day of the event was sandwiched between two snow days!  Yikes!  And the thought of travelling up to Glasgow in snow with one of our precious classic cars, did not appeal.  But as luck would have it Wednesday dawned, and was a beautifully bright, but chilly day. 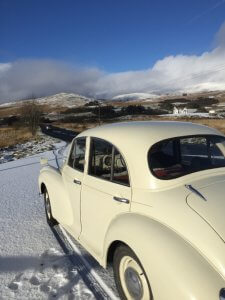 We were entered into the Monte Carlo Heritage Run, leaving from Glasgow’s Clydebank.  OK, we have to confess we weren’t going very far – just down to the first official checkpoint at the Auldgirth Inn, just outside Dumfries. Handy, at just 40 minutes from home!

The original Monte Carlo Rally was started by Prince Albert of Monaco in 1911.  He wanted to celebrate the new fangled automobile and its development. Cars set off from all over Europe and “rallied” to Monaco for the finish.  The winning criteria for the original rally was a little strange, to say the least.  The winner was chosen by taking into account such things as “elegance of the car”; comfort of the car and the condition it arrived in!  Needless to say this arbitrary approach didn’t go down very well!

Fast forward to the late 1990s and a second Monte was introduced.  The Monte Historique was a race for classic cars which had taken part in the original rally between 1955 and 1980.  The organisers also introduced a more sedate run down to Monte for older classic cars, called the Classique.  Unfortunately on this occasion, we only had time for the third category – the short Heritage run.

We took the scenic route towards Glasgow, and also the “scenic” route through Glasgow!  (How would we ever make it as far as Monte Carlo?!!!)  This meant we ended up being the very last car to arrive and unfortunately missed lining up for the general public.  Luckily we did make it in time for the “Driver’s Brief” and to have a look around all the other fabulous cars.  We also somehow managed to win the “Best dressed crew” prize, much to our astonishment! 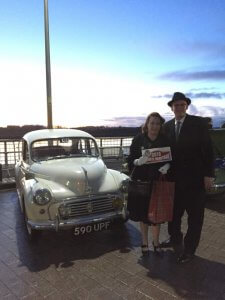 The real excitement and spectacle started, as the cars began to line up behind the ramp before heading off.  Each classic car, whichever run they were doing got the same send off down from the ramp  the driver was interviewed over a tannoy, the time counted down, the saltire was waved and bagpipes played. When it came to our turn, Paul drove up on the ramp, it was the nearest we’ve been (or likely to be to celebrities!!!), with the cameras flashing, and the cheering and waving as we drove off. 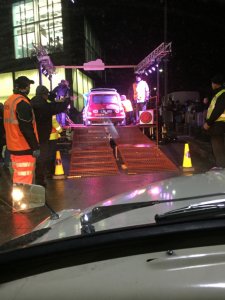 Unfortunately, the road book we were given might as well have been in Chinese, so Beth, our co-pilot had to resort to more modern methods of navigation!  We reckoned as we wern’t in the “grown up” rally, it wouldn’t matter.  However, we did get to our first and last checkpoint at The Auldgirth Inn, just in time to have a cup of tea, and meet up and chat with some of the other participants.

So, we hear you ask, are we going to do the full Monte Carlo Rally?  Well, it’s definitely on the bucket list, so who knows?!

WE ARE OPEN AS USUAL, FOLLOWING COVID-19 GOVERNMENT AND PUBLIC HEALTH GUIDANCE FOR YOUR SAFETY
Got it!
X